I feel only slightly better than last week, and I’ve lost count of the amount of hot toddies I’ve drunk, but I suppose I am very slowly on the mend. Just as well, because this week is a pretty interesting question! The title gives it away, of course, but the full question is Have you ever wanted to rewrite the ending of another author’s published book? How would you change it?

Warning: major spoilers ahead for both the Hunger Games and Forty Thousand in Gehenna.

I must say that on the whole I very rarely want to rewrite just the ending of a book. Usually I either like a book or I don’t, or if there are specifics I don’t like, they’ll be a thread running through the book, or one particular aspect. I can only think of one book (well, series) where I liked the whole thing but hated the ending, and would gladly rewrite it, and that’s the Hunger Games trilogy.

I’ve pretty much explained this already in one of my previous posts, but to recap, there are several things I hated about how Mockingjay ended:

So those are the three things I would change. Finnick would stay alive, because his death in the book serves no purpose whatsoever, and he’s pretty damn cool. Primrose would stay alive too – not because I like her, but so that she can become Peeta’s love interest, thus leaving Katniss free to return to Gale. Technically I suppose Primrose could still die, as long as Katniss dumps Peeta. Seriously, I couldn’t care less about Primrose, who has no real personality all throughout the books, but Peeta is the deal-breaker. Peeta is a complete wet rag, and he represents everything the Hunger Games have inflicted on Katniss. Gale reaches to what Katniss was before the Games, and while some might see her hooking up with him as her regressing to how she was, to me it would indicate that she has overcome the hardships of the Games and has reconnected with her true self – the huntress who provided for her family. Not the broken woman who was forced into a relationship with a non-entity.

Aside from that, I have actually once rewritten the ending to a book, and that book was C.J. Cherry’s Forty Thousand in Gehenna. 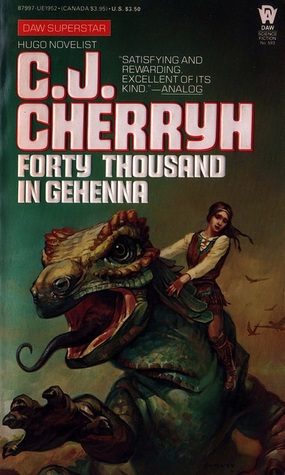 I didn’t necessarily want to rewrite it, but…

Okay, here’s the story. Back when I was at university, I used up some of my study credit to take a literature course which was specifically on Science Fiction and Fantasy books. I believe it was ten weeks, and we had to read a novel for each week. This novel here was one of them.

It’s quite an interesting book – it spans a period of probably about 150 to 200 years, and in that period it charts the development of a group of about 40,000 people (mostly clones), dropped on a remote planet to colonise it. For various reasons the colony is abandoned by those meant to continue supplying it, so the colony develops completely independently from its parent civilisation. Most of the tech they start out with soon fails in the muddy, humid climate, so perforce it ends up being fairly primitive, and on top of that the humans have to learn to live with the giant, lizard-like indigenous species (calibans) on the planet, which results in a strange symbiotic relationship. Eventually the parent civilisation comes back and sort of picks up the reins again, and the book ends in classic sci-fi style, with the calibans being recognised as an intelligent species and them being accepted in the space-faring world.

Anyway, as the final exam for this course we had to write an essay. This could either be a ‘classic’ essay, covering some particular topic from any of the books, but as an alternative the professor also offered the opportunity to either write an extra chapter into one of the books, or to rewrite an ending. I chose to do the latter, for this book. The original ending has the planet’s inhabitants being observed by a scientist from the parent civilisation, to try and establish what effect the long separation from an advanced culture has done to the colony. This scientist is supposed to only observe, not interfere, but she becomes sympathetic to the humans and their calibans, and resists her superiors’ inclination to class them as a lost cause and abandon them. The eventual end is obviously that they were not abandoned and ended up space-farers, but in my version I had them abandon the colony, and only the scientist stayed behind. What it meant was that rather than the calibans being elevated into space by a ‘higher’ civilisation, they ended up heading into a far more uncertain future, but one that they would have wrought entirely on their own.

I thought it an interesting deviation, did my very best to keep the writing in keeping with the rest of the book, and handed it in without any great expectations. In the Netherlands, school or university work is marked in numbers out of ten, with 1 being the lowest (1 for putting your name on the paper, is the common joke) and 10 being perfect. (The full scale is usually this: 10 – perfect, 9 – very good, 8 – good, 7 – sufficient, 6 – barely sufficient, 5 – insufficient, 4 – bad, 3 – very bad, 2 – atrocious, 1 – why did you bother turning up?)

I was expecting to maybe get a 7. I’d have been very happy with a 7. So when I got back my essay and saw the big fat 10 on the front, I was puzzled, to say the least. I went to the professor and kind of just went ‘???’ at him, and he said there was no mistake, to him my ending was perfect.

It turns out that this book was his all time favourite (he never bothered to mention this during the course, or I wouldn’t have touched it with a barge-pole), but he’d always absolutely hated the slick, optimistic sci-fi ending, which he felt was completely out of synch with the overall feeling of the book, which is vaguely depressing. My uncertain but self-sufficient ending was much more in keeping, so he absolutely loved it.

Needless to say I had a pretty glowy feeling for the rest of that week. Someday I should dig out my old university stuff and see if I can still find that ending – I might post it up here if I do.

Original post can be found here. It’s quite fun to see that there are three other people who hated the end of Mockingjay!